To the Orchard we will go...

Apparently NO ONE had school on Friday....and EVERYONE decided it was the perfect day to hit the Orchard for the pumpkin patch. Granted WE were smarter than most and left the house by 8:30 am. When we pulled in there were a measly half dozen cars parked along the patch. The children had a grand time frolicking through the vines and choosing their perfect punkins. 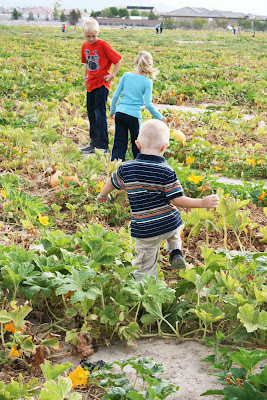 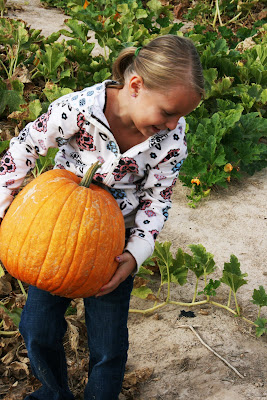 Samantha didn't waste much time and picked the "old man" of the patch. She loves her wonky little(big) wrinkled pumpkin. (notice her pink polka dot shoes...not so clean anymore. this is her answer to me saying "wear some tennishoes...with SOX!) 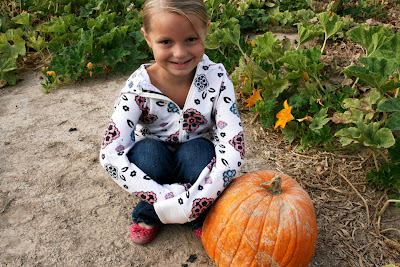 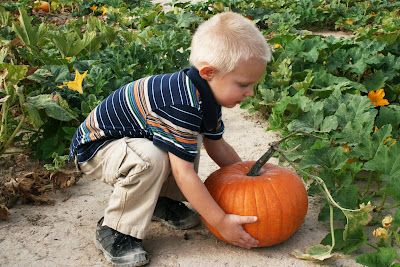 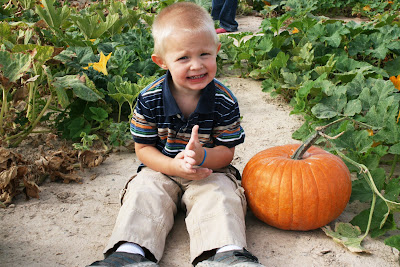 Jack seems to approve of the pumpkin I chose for him...although he kept saying in an exasperated voice "mom, is too heaveeeeeeeeeee...."
This poor kid spent more time in the dirt than anything. He refused to walk and so in all his running he constantly biffed it. He didn't seem to care AT ALL. (notice the little blue band on his arm....ya, that's his new fashion statement....hhhhmmmmmm, wonder where he came up with that one????) 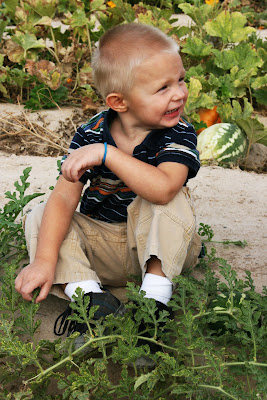 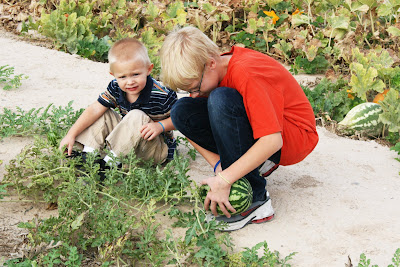 Nathan decided to pick a few watermelons along the way. Having never picked one before we figured if the outside was nice and green the inside should be nice and red...RIGHT????? it was not. ever wonder what an unripe watermelon looks like? it's white. I almost thought it was some freak cucumber! 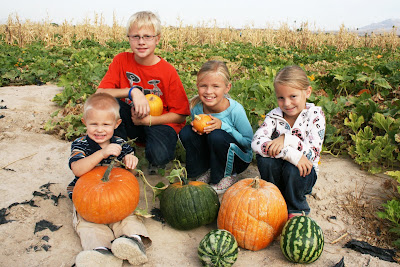 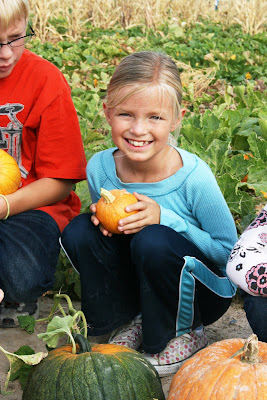 Kristen took the longest to pick her pumpkin. Apparently finding the teeniest pumpkin in the patch was harder than it looked! Nathans wasn't much bigger and by the feel of it will be the first to ROT! I went with a nice creepy green one...love it!
By the time we got ours picked the place had turned into a zoo. The line to drive in was looooong, the field across the street was packed with parked cars and the line to check out and pay was loooong.
But we had fun and we returned home 2 hours later much, much, much filthier than when we had left!
Posted by Carol at 10:35 PM

that looks like so much fun. we've never been there. maybe this will be the first year we go. are there lots of pumkins to choose from?

i need to catch up with you... and get those "boo" letters to you.

the kids look so grown up. what a fun day together. i am a mean mother, i went to the store and picked the pumpkins myself.

What do you think about a family gift for Christmas??

Oh, I miss the Orchard. It is so much fun picking your own pumpkin. Good ol' dirty fun. Remember that one year someone broke in and stole all the pumpkins?! That was a sad year. Glad you had fun!

You are such a good Mom! Your kids are lucky to have you. I usually just get the pumpkins myself at Smith's. My kids really don't know any different. I will be in big trouble if they see your blog!

girls dont be too impressed with me, this was the first time i took them there. and...my patience was tapped by the time we got home.

In all the years I've lived here, I have never been out to the orchard. I know James has been there with a school field trip, but me-never.

It looks like you guys had a ton of fun!

How fun! I wish we had a pumpkin patch nearby. Maybe we do--I'll have to do some research.

The photos are really great too!

We got pumpkins last weekend too, but from grandpa's garden in Cedar. Look at you getting up all early and motivated on a no school day!

I LOVE the pumpkin patch! The kids look like they had a great time.