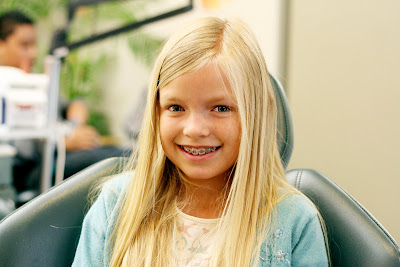 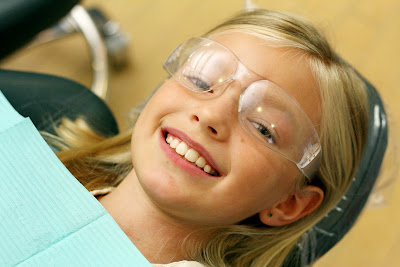 Just look at those big ol' pearly whites.
She's so happy.....except for the retainer she has to wear.

Of course, we'll most likely be doing this again in a few years.
She is only 9. But at least she won't have to endure what I did
as a child. Horribly crooked teeth and no room for any of them
leads to much teasing and name calling for many years.
I didn't want that for her.

On a side note...notice also her little ear there.
There's something in it!

A few weeks ago she mustered the courage on a spur of the
moment girls day out. She decided to just get it over with!
She's much braver now than she was a few years ago.

The story goes like this....the girls were begging, BEGGING
to get their ears pierced. So as a Christmas present we took
them to the mall. Kristen suddenly not convinced of the whole plan
decides to let Samantha go first, to see if it hurts.
Samantha's immediate (and dramatic) tears was all the information
she needed. NOPE, not getting her ears pierced.....maybe ever!

So here we are nearly 2 years later, ready to take the plunge.
She was VERY nervous, and held back much wanted seepage from the eyes.
But she did it...and she was SO proud of herself.

Now if she could just take them out and put something REALLY fun in them!
Posted by Carol at 9:25 AM

Yay for Kristen! Looking cute with those pearly whites!

what a sweet smile she has!!

i didn't get the courage to get my ears pierced till i was in my 20's so she's doing good!! haha.

She will have to wear braces again?

She looks great. My kids are only dreaming of those days with no braces. Take care.

cute smile and ears too.