While we were visiting in Utah last month.....we got taken for a ride.
To a house.
That is a replica of the house from UP...you know, the mooovie ;)

Not quite sure why it's being built....advertising, I suppose.
It's a good gimic to get people in the neighborhood and look at the houses that they are really building and trying to sell.

But I won't deny, it was cooooooool!
I can't wait to see the inside when it's done.
We were shameless and peeked in all the windows and walked all around the house.
It even has the picture of paradise falls hanging in the living room. 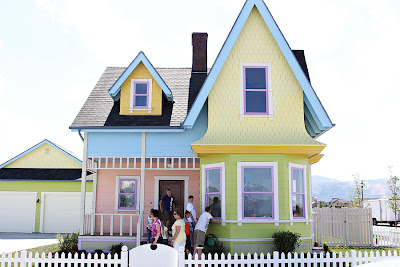 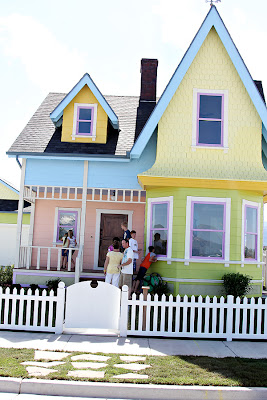 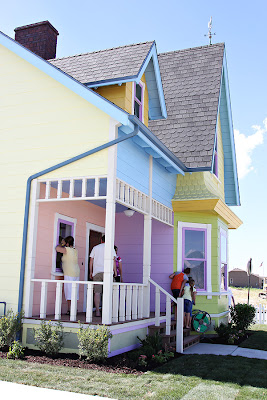 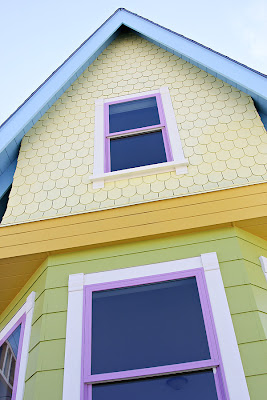 Funny side story.....Jack was so excited to go see the house, but the second the rubber hit the pavement he was out like a light!!!  Didn't even make the 5 min. drive to the house.   He slept while we looky- lude around the house. Then we left and had to go to the store.  After dragging him through the store and getting back in the car he asked if we were still going to see the UP house.  Sadly, I had to tell him he missed it.  But I had pictures....and he was cool with that.  Thank goodness!!!
Posted by Carol at 4:20 PM

I saw that on Yahoo news last week. It's supposed to be in the Parade of Homes there and they're going to tie a bunch of balloons to it. It's so cool that you got to see it. And, it's for sale!!! How fun would that be.

That's so funny! The colors are a little much...I wonder if someone winds up living there? Kinda fun though.

My sister lives in Herriman and we saw this house when we were visiting her. We didn't get pictures though. It really is a fun idea!