5:30 a.m. baby wakes up
4 bowls of cereal
clean kitchen
soda with my waffles
take down bunk beds
break bed (not me)
trip to Home Depot
fix bed
one baby working (real hard) on being 2
threaten girls to clean room (or else)
threaten boy to clean room (or else)
rearrange girls room
rearrange boys room
one baby down (for 2 1/2 hrs.) :)
5 loads of laundry folded and put away
give in and help kids clean rooms
vacuum said rooms
force kids to do more chores
cook dinner
clean kitchen (sigh...again)
kids down
My bed...PRICELESS!
Posted by Carol at 8:45 PM 7 comments: The only time I've ever been able to coordinate my kids costumes.
(I kinda forced em' into it...hee hee hee)
All year long I told the girls they could be Daphne and Velma
They were ok with that but as time got closer they tried to
make other suggestions. Too bad.
Nathan chose his costume and it still goes together, ya know
scary monster/skeleton...It's all Scooby Doo!

Anyway, loved the costumes!!! I think they have been my
funnest to make so far for the girls. Gotta love Samantha's poor Harry Potter
glasses that are a little too big.

I've not had much say since then when it comes to costumes!
Posted by Carol at 10:03 AM 8 comments:

A Trip to the Park Love this girls laugh.
She always puts her whole face into it!
This is Kristen after school on picture day.
She looks like a little Dutch girl. My son is a tree hugger!
He just walked up to this tree and kept hugging it.
So glad I had my camera at the ready.
Posted by Carol at 4:09 PM 7 comments: October 31, 2003
One of my favorite sets of Halloween costumes
Kristen - Pocahontas...the wig kills me
Nathan - Froddo (Lord of the Rings)
we drew hair on his feet, wore the ring around his neck and everything!
Posted by Carol at 3:16 PM 5 comments:

Lets go to the park! Took the little ones to the park yesterday. Had a rough start. My poor old bike needed air in the tires the last time we went out and sure enough, flat again. So we pumped those. Started to leave and realized the poor old tires on the trailer also needed air...lots of air. One tire, never quite got full. Finally got off. Had a feeling they would not be full when we got home, I was right. (Santa, mama needs a new bike and trailer :))   Anyway, Samantha had fun riding.


Found this nest full of duck eggs...cute. Samantha's comment with a grump "the ducks aren't sitting on the eggs". Sewing on the brain...

These last few months seem to be pulling me back to my roots.
Needing to make life simpler.
Needing to use what I have.
Sewing a little here and there.
Being creative.
I have plenty of resources stuffed in the closets.
Made myself a little skirt recently...I've had the fabric for a year. 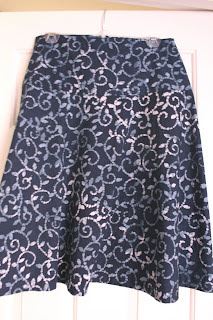 Found this yummy fabric and lace for a skirt I will make Samantha.
After I made mine, she put in a request for her own.
Love the punch of aqua!
Of course this will have to wait for some Halloween costumes ;) 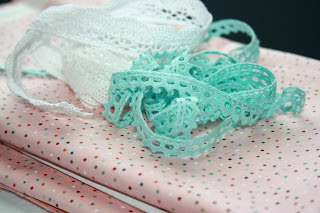 I have some other old unfinished projects stuffed away that I think I may be pulling out too.
But don't hold me to that...
Being creative definitely soothes my soul.
Posted by Carol at 9:44 AM 1 comment:

how to sew a bit and do a little crocheting.
I remember making TONS of Barbie blankets and pillows.
I still have a few...my girls use them now.
Love that my mom saved so much of my stuff. A few weeks back Samantha wanted to sew something.
We pulled out my big bucket of stuff I can't seem to get rid of...
glad for that now.
She picked her fabrics and trim.
We made a blanket for Hello Kitty (or Butterflyee as recorded on her birth certificate)
Made a pillow too (though it's lost at the moment)
She helped to sew it. She pushed the pedal.
We had fun.
These are the kinds of memories that I have.
I want my kids to have them too. So, I've been sick. Spent last Mon/Tues attempting to stay in bed. It's been lingering all week, thought I was doing better, but on second thought, maybe not. Trying to decide now if I should go to the Dr., yuck! Maybe if I continue to ignore it, it will eventually go away. :)

Beginning to feel like I have Halloween breathing down my neck. This is my pile of costumes I need to sew...3 of them. Thought I had all the time in the world having bought it all in September, but alas, here we are 1st week in October, sick and not wanting to sew. They shouldn't be too hard though and I still have 3 whole weeks right! Oh ya, here's the details...Nathan wanted to be something scary, so a Dementor is his choice. He wanted to be something like Scream or some other ax murderer that every other boy in school wears. I wouldn't allow it. For one, EVERY one wears those masks, and why should he choose a character he doesn't even know!
Kristen was easy, she wanted to be a Devil. That girl decides what she wants and does not waver. She's easy to shop with.
Samantha had no idea what to be. Took her to the fabric store to look at patterns. The only thing she liked was the medieval princess costume with the tall hat and veil. She told her grandma she didn't know if she was going to be a bride or a princess. When I told her she was a medieval princess she said excitedly, "Ok, so I'm an evil princess!" LOL I'm glad she wanted to be something princessy...I think we are on the tail end of that business in this house.

HAPPY HALLOWEEN 30 SOME YEARS AGO My brothers and I... beauty amongst many beasts!
These are the only Halloween pictures in existence (that I know of) of me as a child. Amazingly I do have faint memories of this time. I remember my brother coming up with his monster mask. I also know that I wore this beautiful ballerina costume (I believe my mom made) for as many years as I could squeeze into it, I think this may have been my last! Of course I was in full pretend mode, with the arms in every pose! Love when costumes were made out of what you could put together at home, although I don't make my kids do that. But I love making their costumes, and am always secretly disappointed when they want one from the store. This year they have me busy with that task.
Posted by Carol at 9:59 AM 3 comments: