It's Saturday.
It's conference.
It's quiet and relaxing.

No chores right now, just listening to conference. Which I love. Will be doing some scrapping along the way, which I also love...duh.

It's been such a crazy week, much going on.

Jack changed preschools this week. The way it worked out(it's a long story), he ended up at a preschool where he didn't know anyone and all his friends ended up back together. He was sooooo sad and never wanted to go to school. For weeks he kept asking if they were still going to be his friends and when would he go back to his old school. It was breaking my heart. Than I found out that all his friends kept asking where he was...and they were missing him. So my wonderful friend offered him a spot...even though it's more kids than she wanted...it was just too sad for all the kids ;( It's good to know my little Jack Jack is loved. And now he is one happy little man and is back in the usual groove of preschool. We are sooooo happy!

I got a surprise visit from my cousin this week. We haven't seen each other in 9 years! Which is crazy. We were so close growing up even though we never lived in the same state. It's crazy how life and distance just get in the way. But so nice to see that 9 years doesn't diminish the relationship at all. It was just like old times....though a little wiser :) 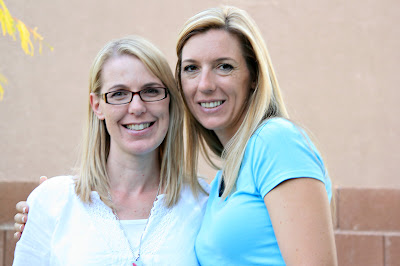 I'm in charge of the activity day girls at church and we had our Mommy Daughter Night. It turned out really nice and I think everyone had a good time. We served a light dinner and had a few activities. We had been teaching them about etiquette so the night was based on fine dining, and being a proper princess. Kinda :) Mostly, it was fun.


I've been doing a no dairy diet the last month.....I've been told it would help with the MS symptoms. I'm not so sure it's doing anything. So I totally caved this week and have had some dairy again. Mamma needs pumpkin pie!!!! We will see now if having it again does anything. I doubt it.

Speaking of MS.....it's Oct. and that means testing time again. I'm scheduled for a few more MRI's and a dr. visit. We shall see. I'm working on getting into a specialist in SLC for further evaluation and diagnosis.

glad your cutie jack is back with his buddies! the tough life of a preschooler. haha.

looking forward to seeing what you do with that yummy scrapbook delivery!!

oh no, more tests :( sorry to read about Jack and his preschool but I'm glad it all got sorted in the end. And yay on your cousin visiting xx

I'm so glad Jack was able to come back to preschool with his friends. I know he was missed!

Sorry to hear you have to go through more testing. I hope you get some answers soon.

I hope you have good news after all those tests. Glad to have Jack back at preschool. Glad to be having the preschool carpool conversations again. I missed those :)