If You Were Wondering.... 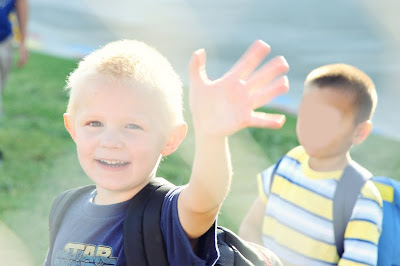 I believe Jack looks excited and ready for his first day of kindergarten....don'tcha think????
They wouldn't let us parents through the gate (scrooges) so we had to wave to them from behind the chain link fence.  I felt like the one in prison!  Later that night when I asked him if he was excited to go to kindergarten again in the morning he said "I have to go again???? but I already went!!!"
Ya...sorry bud, it's a long term deal ;)  He definitely enjoys it and gets  himself dressed and ready every morning but wonders why i ask him everyday if he had a good time!!!  He says " you ask me that everyday mom!!!" 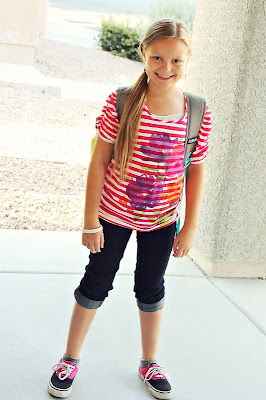 Samantha is happy....mainly because she has new clothes to wear! Shirt, converse and rolled up jeggings ;)  Lets just say she tolerates school.  But I know she loves her class this year and her new teacher ;)  She normally goes for a pretty fussy hair do on the first day, but she surprised me by just putting it in a pony. 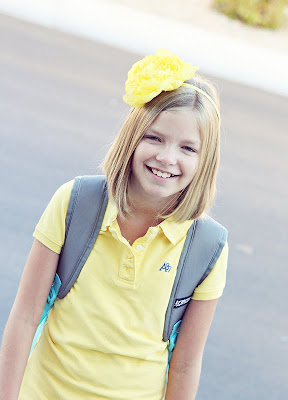 This girl couldn't get out the house fast enough!!!  She came home saying middle school was the best!!!!  I think she loves all the paperwork and organizing and that many more teaches to looooove!!!  That back pack is so full of stuff she doesn't even know if she needs....I think it's weighing her down!
Now Nathan......no pics of him.....he was gone before my eyes ever opened!  Thanks dad ;)
He liked his first day of high school too....I think he surprised himself ;)
Here's to hoping for a gooooood year and my 2 1/2 hour block of no kids ;)
Posted by Carol at 9:16 PM

You've got beautiful children! I love Jacks comment about having to go again tomorrow! LOL!

the kids look so cute.

They all look so happy to go back x

awesome pics, Carol! They wouldn't let parents through gate at kindergarten? Or are you joking?? Never the less, these are really awesome pics. Beautiful kiddos!!

no joking Tanya!! they would not let us in the gate (well it was one teacher in particular) and believe you me, we have all complained about it. it's never been done this way before, trust me, I have 4 kids. I've been through the system ;)