Christmas 2008 and the Toilet Paper Mummy

We had a GREAT Christmas!
Just the six of us (as usual)...
We always try to take the kids somewhere on Christmas Eve
and have some activities to fill the day.
This year we went out to the Ballagio to the Gardens.
They were really pretty, but somehow, I was expecting more of it.
And it was SUPER crowded. But we had fun and someone took
a lovely family photo for us.
We followed it up by Gingerbread making.
The kids each got there own house this year.
That was a hit and we will continue on with that.
No more sharing houses for these guys! 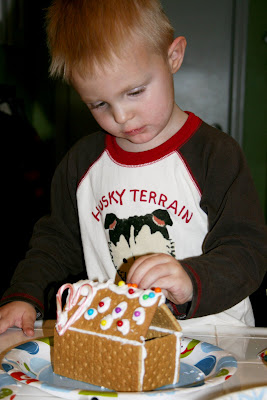 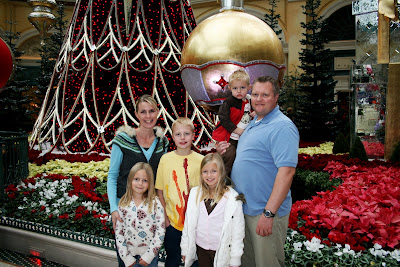 Jack amazingly managed to pick out his own pkg. and
proceed to help himself
to the opening of presents on Christmas Eve.
Nathan reported the crime in fits of laughter
(I'm sure he had nothing to do with it!)
we just put it back together under the tree. 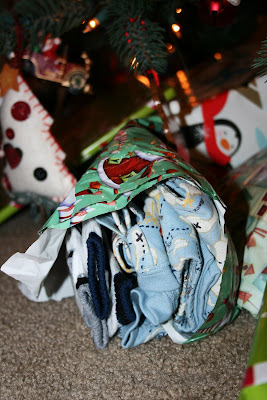 A few years ago we started an old family tradition
with our kids and play the 7-11 game.
It involves dice and gifts.
Obviously a hit!
They receive a variety of crazy, silly, and tasty gifts. 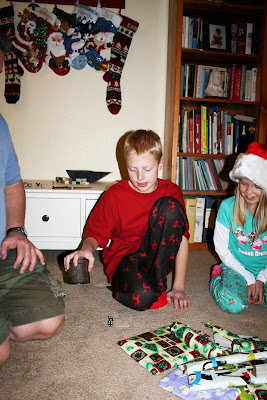 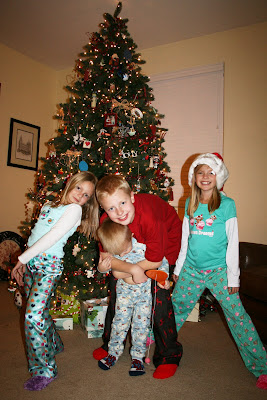 Ahem......morning did not come as early as usual. It really was a blessed day! We told the kids we didn't want to hear from them before 6am (hey, that's the most we could ask of them) and for the first time EVER! they actually obeyed. In fact, we even had to wake the boys.
Santa brought a group gift this year...the ever famous Wii
Here's Samantha...in shock...who just the night before said she wished she had asked Santa for a Wii. I told her that was too bad because she had already written her letter long before.
tee hee hee.
Then there's Kristen telling Nathan "i told you it was a Wii!" she had made her guess earlier when she saw the wrapped pkg...but we all insisted it was too big to be a Wii. 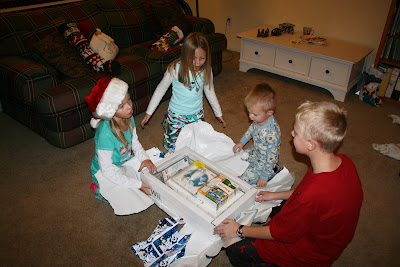 Then the morning moved on from Santa to the rest. 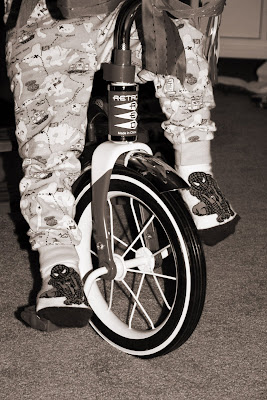 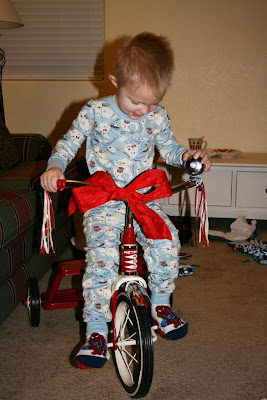 Kristen the "school teacher"
in front of her favorite gift...
a dry.erase.board...
seriously, look at that face!
You'd think she won the lottery! 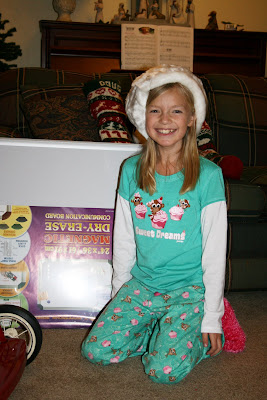 Samantha had only 3 things on her big list...
(although she was resigned to knowing she wouldn't be getting ANY of them)
an Ipod
a cell phone
a laptop
(really, she IS only 6!)
Here she is opening a gift she's not really sure what it is...
then I explain to her that it is an MP3 player...
Just like an Ipod.
She was cool with that. 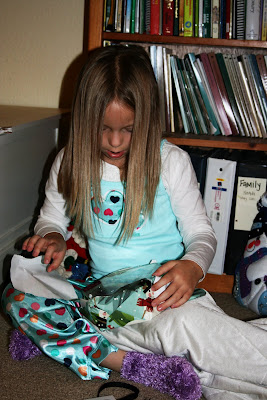 Nathan's little present...
it started ringing...
do you think he got what he wanted??? 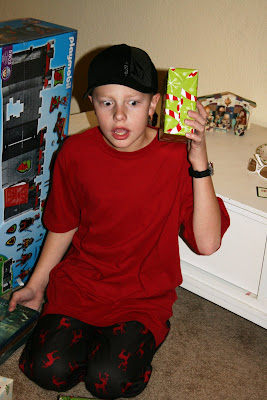 He probably nearly wet himself
over a cell phone.
I didn't get a phone till my mid 20's, and even that brick was short lived.
I was really in my 30's before it was a constant.
My how times have changed.

Jack getting a good look at some weaponry from his Buzz Light Year toys. 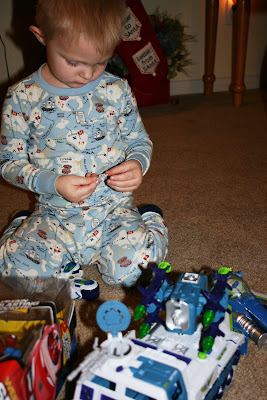 Really, can you say youngest child...
Already knows how to work the lazy system,
hitchin a ride from his sister!
He's too cool in his upside down Diego shades. 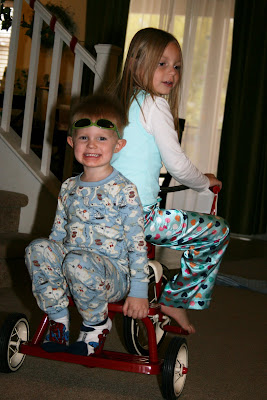 And now....
I introduce the mummy.
Samantha won a roll of toilet paper (with a treat stuffed inside)
from the 7-11 game the night before.
I didn't think she'd actually want the TP,
but obviously she had something in mind. 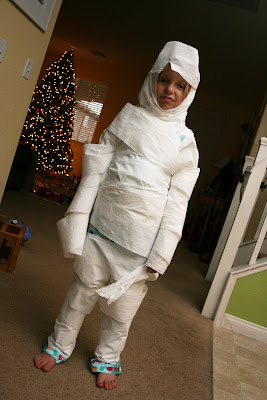 looks like you cleaned out santa. i don't think there will be anything for next year.
glad you had a nice christmas together.

Steph...actually No...santa only brought the one thing and the kids only got 3 things each from us. That's it. It was a pretty simple year and nothing was fancy or expensive, except the Wii of course, and they only got 2 games with that.

maybe you can give me some flash lessons after you get it all figured out!

Isn't it fun when you can make them all happy at once? I also would love some flash lessons. You get us all started.

I personally love dance dance revolution. It gets your heart pounding! My girls like it, too. It has different levels, easy to hard. It is pretty active, thats why I like it. My kids aren't just sitting on the couch. If you get two mats you can do compitions and stuff. It comes with one mat. We also like the Wii fit. All my kids play that. Its fun too. I think you can rent games from the video store, I would do that before I bought another one. My brother bought them one that looked fun, but . . .I wish we would've rented it first. :)
What games did you get and are they fun?