{on a side note...i sure hope i didn't offend anyone in regards to fb. that was not my intent. we were just lamenting at all the friends we've lost to fb. i know there are wonderful things about it, i have found many old friends because of it. but it's just not a forum that works for me. i can't seem to express myself in one sentence...apparently i have way too much blabbering in me for that.}

A few weeks ago we were up in Utah and spent some much anticipated time with our good friends. They have joined the coolest craze since sliced bread...raising chickens. Apparently, that's what all the cool kids are doing.

My kids couldn't get enough of these baby chicks.
I just hoped they would survive our visit ;)

Their new home came with a dog run and this super cool dog house.
Which has now become a cool chicken coop!

Jack was in chick heaven! 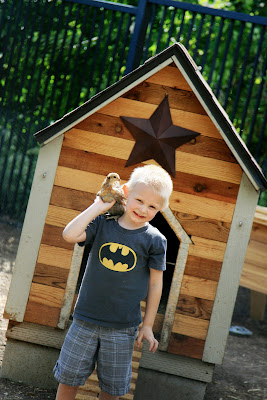 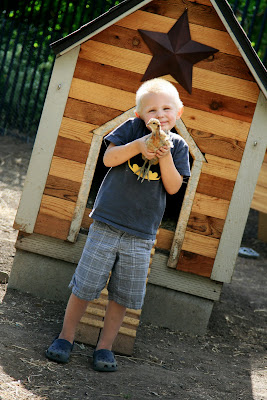 I did not bring enough clothes to keep this one clean. He spent most of his time sitting, and crawling around the dirt trying to catch chickens.
After posing for some shots he let his chicken go and picked up this big rock. He posed it on his shoulder just like he did the chickens.
With all the little babies running around I was worried he would carelessly drop the rock.
I said to him
"Jack, be careful with the rock, don't hit the chickens with it"
his response....
"I know mom, cause that will make the blood come out and we don't want the blood to come out of the chickens."
...........riiight.
glad he's got that straight! 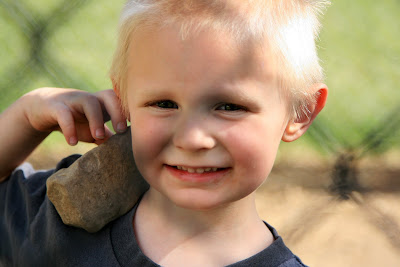 Kristen and Anna. Kristen is surprising me a bit and turning into quite the animal lover. She adored the chickens and played with them almost as much as Jack.
Samantha on the other hand, not so interested. 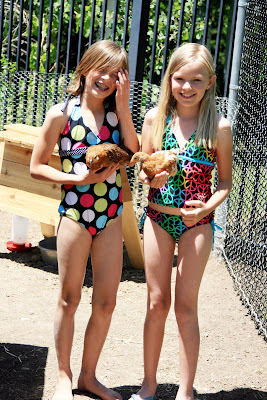 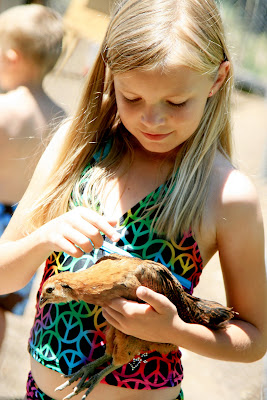 We now anxiously await some pictures of the cool eggs these chicks are supposed to lay...{hint, hint}

I don't think you were "offensive"...well...calling it lame may have been unnecessary :) ...I just think FB and blogging are two completely different animals and each serves their own purpose. I also think you're right...blogging needs to be for you. I remember feeling hurt that none of my family every seemed to read my blog and then I realized, it really didn't matter. It is for all those moments that Lane and I want to remember,not anyone else. You need to do what YOU enjoy. I figure when I take 9 credits in two and half months neither will matter to me anyway!

Geoff and Rachael have chickens too. They're getting a little tired of eggs! :)